Ask any IT professional about his company, work and salary, you will always have to hear a bad thing or two. Its blessing in disguise if you are working in corporate. And when you go on restriction free team outing you realize it gives you ample amount of opportunities to see different side of your coworkers, my experience was no different. The day we planned our outing for a beach, I was sure sea will change people and will make them show their different style of life. 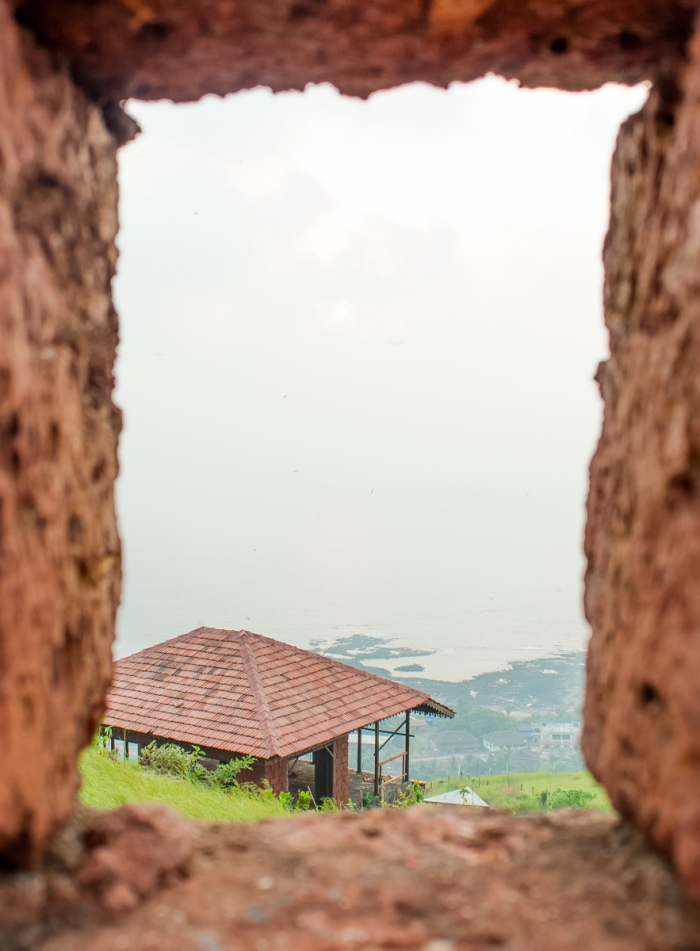 While the world is producing chaos every moment, Hindu Muslim unity was the most noteworthy fact of our trip. People with different culture, religion were abundant and all had affection in their eyes for each other. The most beautiful thing I saw in that small village was a Mandir and a Masjid built right next to each other. People did offer their prayers in there own way and lived in harmony. The affection and respect was not customary it was something which came out from heart, no double standards. I wondered why people from larger towns keep hatred in their heart and kept grudges for other religions. Can’t they understand universal brotherhood the way these villagers have not only understood but are actually living daily.

In India we say “Atithi Devo Bhav” which means “Guests resemble the God and so they should be treated that way”. In the times of colonial societies when your neighbors don’t even care if you are alive or dead, these Poor People with Rich Hospitality and even Richer Hearts depicted what we had forgotten about guests. No matter if they have resources or not, no matter what situation they are going through they are always happy to help. May it be showing you directions, suggesting eateries, giving boat rides or selling you fishes the feeling of respect and affection drips from every word they say. I recall reading it somewhere that if you want to see real India visit villages. I dare to change the saying as “visit villages if you want to witness the true Indian hospitality.” 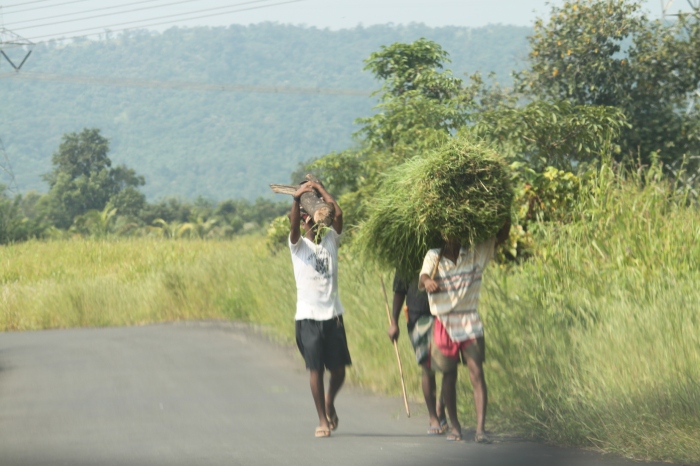 If someone is visiting a beach and is not talking about sea then chances are that person didn’t enjoy anything and was a loner better say looser. How beautiful it is to see the forms sea takes throughout the day. Often calm from outside still hiding terrible things beneath. Or sometimes showing his angry side as if to tell us that the calm the person is usually the more troublesome it can be when tested over the limits. The first thing that came to my mind after seeing sea was a, poem by one of the very famous poets in India. 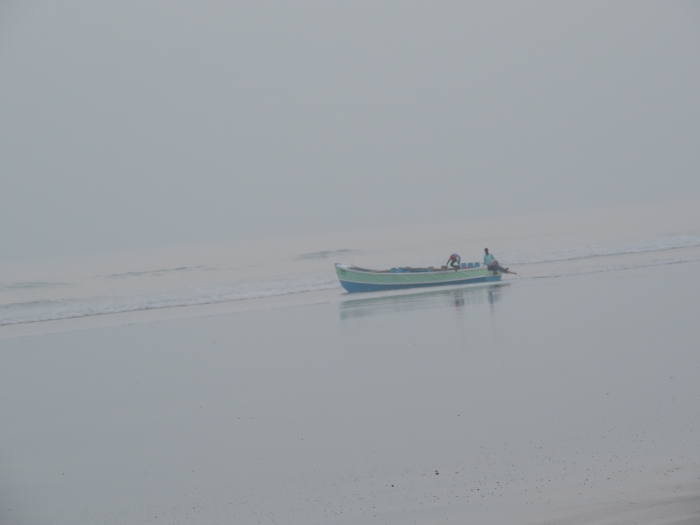 If you have an artistic mind sand on the sea shore becomes your canvas and you go on expressing yourselves. Same was with me, My favorite past time was spending time on sand, writing names of characters I’m creating for my stories, my website’s name. Oh boy I was revisiting my childhood.

They say nature is your biggest teacher, I say, “bravo!! You said it correct”. The sunrise, the sunset, the Silence of the sea, the trees, birds, sky, the moon everyone has something different something new to be learnt by us. They give us chance to perform introspection, think on how people and careers can reach zenith and disappear as if they never existed. The quality to be implemented to stand still even in the worst periods, the chance to take a break and cherish the beauty God has created all around us.

If you follow Bollywood movies then you must be aware of the cult hit Zindgi naa milegi dobara and might also know the famous quote “One who can not swim is skilled enough to be drown..” It is a sarcastic humor and at the same time it conveys an even greater message that if the time is not in your favor then try to enjoy the downfall.

I was taught that if you want to know what is your country’s future then you should pay a visit to schools and meet kidult minds. These young and ready to be molded hearts are nothing but half baked clay, the way you mold them that shape they will take. Although there are people who want to poison these sprouting minds with the poison of religious extremist shit the only thought I was having was may Almighty drive these kids on the way of success, happiness and may make them a catalyst in the emergence of India as a superpower.

No matter how much booze, smoke or huqqa you have, you cannot avoid mentioning Fish when you blog about a beach. I feel I’m not capable of praising this divine food. (Sorry PETA, whenever I see fish i see food 😉 ) No matter how much money you pay, you can’t thank enough to the family who fed you till your heart was contempt. And we all are thankful to the family who not only cooked the best fish I had in my entire life(Mom, I wish you don’t read this or ignore & move ahead 😉 ) but also served it with love and affection. 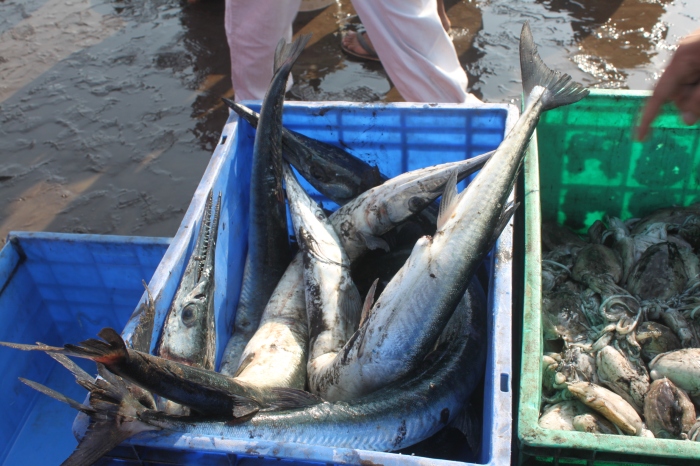 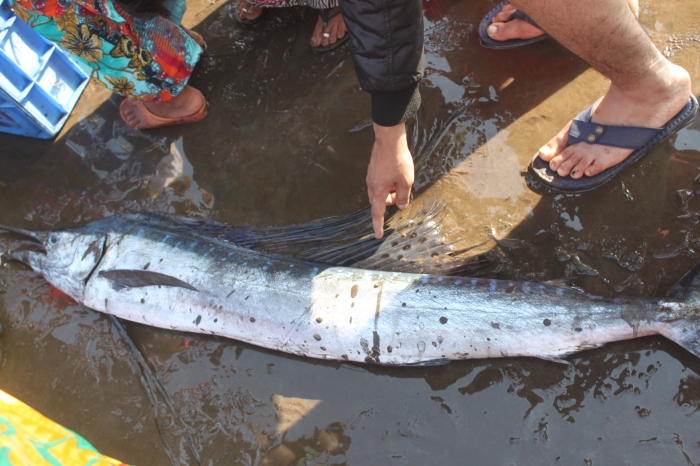 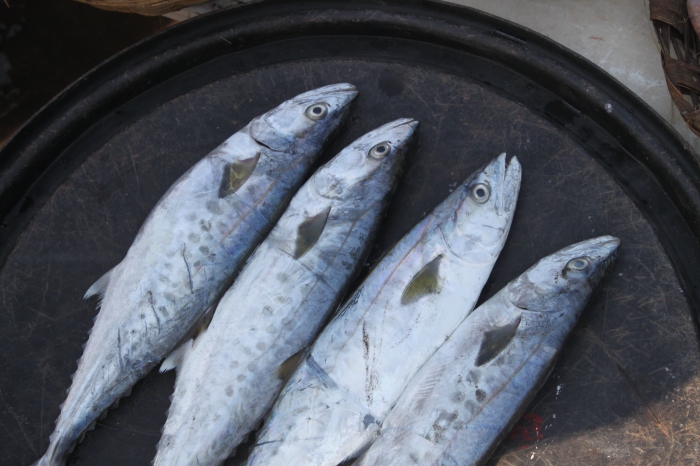 Ending with one sher which really depicts the true calm, silent, powerful & patient nature of sea.

It had been a long time since I had gone out for watching a movie with my Team. One fine day my MD Preetam asked us for organizing a movie event and surprisingly he himself suggested the movie entitled Fandry. The moment I heard the name I Googled about it and got to know that its a Marathi movie. Although I was not very much happy with watching a movie whose promo looked as if it has been shot in ancient times the only thing (obviously apart from MD’s suggestion) which made me give it a shot on day one was it had got nice responses.

On the Valentine’s day when Love was in the air my team was working tiringly  on checking out for security threats in code base and monitoring monotonous Apache Logs same day Fandry was released and we reserved our seats for an evening show.(Yeah I had no date, no lady love was expecting me to buy her Roses to talk sweet nothings). I ended up with working 10 hours straight relaxing myself with couple of Tea cups and smokes before we reached Inox with only one question in mind what does Fandry mean?

When we made ourselves comfortable on the luxury class chairs couples were entering holding their arms around each other and it made me feel like, ‘guys seriously is it really worth watching this movie on Valentine’s day, go on for a long ride instead.’ No sooner the movie started it worked as a spell on me with the true rural language and locations used for picturization.

The movie revolves around a poor boy Jabya (Somnath Awghade) belonging to a cast which is considered as untouchable(Yes its heinous truth of wannabe superpower India in 21st century) in rural areas, desperately desiring to hunt a black Sparrow. His family consists of a down to earth, uneducated, society fearing father(Kishor Kadam), a typical mother(Chhaya Kadam) who has equal affection for all her kids but who had to ask her son for forfeiting his desire to buy jeans so that she could save some money to marry her younger daughter. A divorced sister and ofcourse another sister who is about to get married. The boy Jabya is blessed with two friends who look for his back in thick and thin. And obviously a lady love Shaalu(Rajeshwari Kharat).

Jabya has a crush on Shaalu and she knowingly or unknowingly acts as if she knows it and Jabya feels she is reciprocating the same. He has dreams and he wants to live them. He sells ice candies to buy a jeans and t-shirt to woo her. Also he is trying his best to hunt a black Sparrow which he wants to burn and use the ash to make Shaalu fall in love with her. He dislikes the job his family does of catching the stray pigs and tries to keep himself away from it. The best part about Jabya’s performance is the way he blushes. 🙂

Nana (Jabya’s father) pleads everyone and works on any job he gets so that he could earn bread and butter for his family. Nana carries a deep grief that one of his daughter has been divorced and he has to pay dowry to get her second daughter married. As he belongs to a lower cast he is asked to catch and kill stray pigs causing nuisance which he alone is incapable of doing because of his increasing age.

Every seen is mesmerizing, every character is beautiful and every single statement from the movie is a bitter truth. May it be Jabya’s hiding somewhere to avoid facing Shaalu when he or his family is doing odd chores, Naani(Jabya’s mother) visiting Jabya’s school to check if he is studying properly, Jabya’s father humbly requesting to alliance that he can not pay a great amount of dowry as he is a poor man, Jabya’s friend teasing him on the name of Shaalu or again Jabya’s father crying his heart loud in front of his son that he is poor and belongs to a lower cast and hence can not fight with society.

The movie depicts some really mind boggling truths from Indian society like rich-poor differences, upper and lower cast differences, how people treat poor and lower casts, grievous rituals, dowry problem and what not. When the movie is about to end Jabya nad his sister carry the hunted pig on their way home from school, they pass from the painted photos of Social Leaders Mahatma Phule, Savitribai Phule, Gadge Baba who heavily contributed in reforming the lower casts decades ago and Jabya never even got a glimpse of their reformation, as if he is asking did the reformation actually happened or its also just a myth. The movie ends with Jabya taking an aggressive stand against the wicked society and challenging them to test him.

There are three people who deserve a standing ovation Jabya(Somnath Awghade) with his innocent later determined stand towards love and life, Jabya’s father(Kishor Kadam) who acted as if he actually is living the character and Nagraj Manjule for writing & directing this movie.

When the movie ended we hardly spoke to each other, the only thing we talked about was the fact that some Jabya and his father was going through all this while we were watching the movie in an A/C theater and the world was celebrating Valentine’s eve.

PS: The movie has English subtitles so even if you don’t know Marathi you can watch Fandry. I am promoting and recommending this movies with a deep hope that when some Jabya might need help and you are in a position to help him you won’t have to think twice before doing the noble act. (Well you need to watch the movie to know what Fandry actually means too!! )

A leaf from the past.